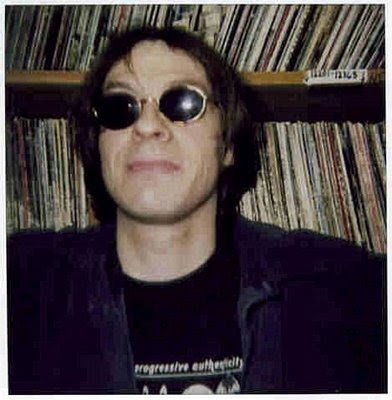 Mike Krause was involved with WZRD for more than 10 years, doing 4 hour long DJ slots with a varying schedule. He was also instrumental in the production of WZRD's long standing live Thursday Nights, and to my understanding, still does from time to time. He can be found playing various thrash, industrial, noise, and other records at any number of small clubs or performance spaces on a sporadic basis.

Mike has been a great help with this blog, and has been in the Chicago noise scene, as a member of Sexual Freedom/Gays in The Military, Dummy Antenna, Flophouse, and Pommel. He also shared some history out of his vast collection of obscure items, about early Chicago noise acts or "sound collage ensembles" on WNUR and WLUW.

Here is a live performance by him under the moniker "Death Factory" which he has been running with since 1988. He sites inspiration as partly from the WZRD "Void Watches" he heard as a youth. Death Factory has shared bills with Bloodyminded, Panicsville, Ghost Ice, Locrian, Lozenge, and Intrinsic Action, among others.

( * There was some cross mixing between some of these tracks . )


Some dialog I included too . I really hate my voice on these earlier shows. I think I’ ve gotten better over the years. Maybe ?

Add comment
Load more...
Newer Post Older Post Home
Subscribe to: Post Comments (Atom)
"Started in 1974, WZRD is one of the first and only free-form radio stations out there. Unlike other formats, even the Jack format, there is no restriction on what's playable on air (save FCC regulations). It would not be unheard of to hear Tibetan Buddhist chants, early 80's punk rock, eclectic mixes, a spoken word piece and public service announcements in succession. They also have one of the longest running live band shows on Thursday nights."